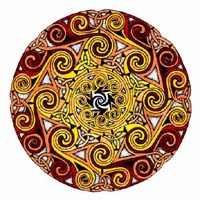 “The life of the dead is placed in the memory of the living.” ~Marcus Tullius Cicero

Last week we celebrated (in one form or another) Hallowmas. No one calls it that anymore. Here in America it’s mainly an all-out candyfest called Halloween. I have nothing against candy. In fact, I have been known to demand certain taxes on my children’s trick-or-treat haul regarding dark chocolate. And I like seeing the little ghosts and princesses and superheroes that knock on my front door. We’re known as a good house to visit, because we give lots of treats.

But that’s not what this series of holy days was supposed to be about.

Samhain in Ireland and elsewhere was the “between time” when herds were moved from high summer pastures to low winter ones. “Between” meaning the day fell halfway between autumn equinox and winter solstice. In pre-Christian times, the calendar and peoples’ lives followed the seasons. And since their lives centered around their livestock, Samhain became a big deal. A time to see one another, select animals to slaughter, hold councils, etc. We do not have a true account of the beliefs of those ancient times, only what others have written. It is thought the people considered “between times” as when “the veil is thin” between worlds, similar to the the time just before dawn. Samhain is between light (spring/summer) and dark (autumn/winter). Since they were going into the dark time, it makes sense they would contemplate death and the afterlife, including lost family members.

It was not, however, the “highest holy day for witches.”

The Church co-opted Samhain like they did every other non-Christian holiday. In fact they went to the trouble to move the already established All Saints Day from May to November, apparently convinced the Celts needed to remember their dead the “right” way. Never mind that in early Ireland, converts observed something just like All Saints in April. The day was officially moved, but as with Christmas and Easter, the customs and beliefs melded to suit the local people.

So just like my Swedish ancestors reveled in their pagan-based yule customs dressed up like Christmas, my Irish and Scottish ancestors no doubt did the same for All Hallows. And I have to wonder if my Irish grandmother found a way to see the other side of the veil, or if that ability was always there for her and she spent her life trying to stifle it.

I first heard of the Celts being a spiritually gifted people in reading my beloved Taylor Caldwell books. That was when I didn’t even know I was Irish or that I had such strong Catholic roots in my family.

In my own “between times” (sleep), I have spoken with deceased family members. (“Dost thou communicate with the dead, Goode Reid?” asked a Facebook friend. “No,” I protested. “they communicate with me.“) I cannot control it. But every year as October 31st approaches, I wish it was true – that the veil will be thin, that somehow there will be a way to see beyond this life. It never happens.

Our area has an ever-growing Día de los Muertos, or Day of the Dead celebration, which (surprise!) corresponds with Hallowmas. Mistakenly called “Mexican Halloween” it is outwardly known for it’s decorated sugar skulls. It is really a three-day celebration to remember dead family and friends, to pray for them and “talk” with them. In old Mexico the holiday lasted a month, and happened in August.

“There are three deaths: the first is when the body ceases to function.  The second is when the body is consigned to the grave.  The third is that moment, sometime in the future, when your name is spoken for the last time.” ~David Eagleman, Sum: Forty Tales from the Afterlives

I saw this quote for the first time in reference to our local Day of the Dead celebration, only it ended poignantly with, “The third is when there is no one alive to remember us.”

“The life of the dead is placed in the memory of the living.”

Some scientists say we “remember” our ancestors genetically, specifically traumas they experienced, left as “molecular scars” embedded in their DNA and passed on to future generations. (Discovermagazine.com, May 2013)

If it is possible to have a genetic memory, then my experiences with psychic connections to family members I never met do not seem so far-fetched. Perhaps the dead need to be remembered and need that connection, especially if they did not have it in life.  Just as I had the need to find them, perhaps they also had the need to find me.

There is another quote by Cicero that resonates with adoptees:

“To be ignorant of what occurred before you were born is to remain always a child. For what is the worth of human life, unless it is woven into the life of our ancestors by the records of history?” (emphasis mine)

I prayed for my ancestors, both recent and ancient, by blood and by adoption, in church last Sunday. I hope they know.

Elle Cuardaigh is author of The Tangled Red Thread

2 thoughts on “The Life of the Dead”