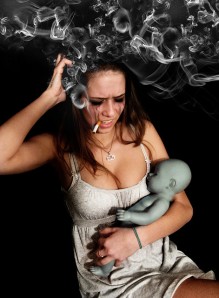 “Your mother was probably 16 and got pregnant after the prom. You’re better off adopted.”
“Your real parents were still in high school. You’re lucky a married couple raised you.”
“Your mother never would have been able to finish school or get ahead, and she would have dragged you down with her. She gave you up so both of you could have a better life. Be grateful.”

This is what people automatically think when they picture a “birth mother”. A teen mom, like the TV show but with some ABC After School Special sermonizing mixed with made-for Lifetime channel drama. In other words, a train wreck. I have been told in serious tones that my teenage parents had no business even thinking of keeping me — that it was for my own good to be relinquished.

The amazing thing about these statements is that my birth parents were 29 and 30 when I was born. People just assume they must have been “stupid teenagers with raging hormones and no clue as to what birth control was”.

Let me ‘splain something to you.

My birth mother was properly raised in an affluent home, a Christian, and divorced. She had a young daughter (who she was bringing up just fine, thank you), a bachelor’s degree, and career. She was cultured, well-mannered, and intelligent.

My birth father was a happily married father of three, a coach and mentor of youth, had a master’s degree in education, served his country, was smart, driven, and from all accounts, very likeable.

My adoptive mother was also well-raised and a Christian. Due to poor health she never finished high school, and went on to work mainly as a waitress, then as a homemaker. She was beautiful and everyone loved her.

My adoptive father was the hardest-working man I’ve ever known. Like his wife, he was raised on a farm during the Depression, so although they were poor they never went hungry. He did moderately well in school, was self-taught as a mechanic and very successful in that profession. They both loved kids.

So let’s look at those assumptions again:

Birth mom: College educated and employed.
Adoptive mom: Did not finish high school and no job.

B-mom: Divorced, but married again soon after my birth and is still married.
A-mom: Married, but died miserably before I started high school.

B-mom: Three children raised are all law-abiding, successful people.
A-mom: Eldest son was in every group home and prison in Washington State, and the stress ultimately killed her.

Tell me how I was better off. Even if my mother had not remarried, tell me how my adoptive family was superior.

It’s complicated. Can we start there? Can we have this discussion? Or will you once again tell me about my life?

Elle Cuardaigh is author of The Tangled Red Thread

11 thoughts on “You’re better off (adopted)”

We Advocate and Educate as Adoptee Voices with Lived Experience