One of my first blog posts. 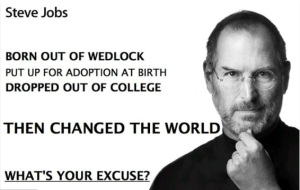 Remember this meme? This is actually a cleaned-up version. I can’t find the one I was bombarded with in Oct 2011. That one read:

BORN OUT OF WEDLOCK
ABANDONED AT BIRTH
(etc)

Notice in the meme above, how it looks as if the second line has been edited? I think it was.

To make a point, I’m going to concentrate on Steve Jobs’ story, although this could be the story of thousands of adoptees.

<start> Isaacson: He said, “From then on, I realized that I was not (just) abandoned. I was chosen. I was special.” And I think that’s the key to understanding Steve Jobs…

…This was not the only instance of his callous behavior during that time period. Just before Apple went public, his longtime girlfriend became pregnant…