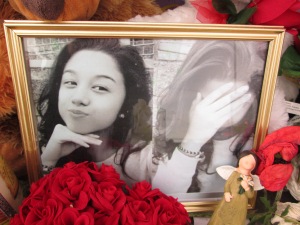 Edit 2019: After writing this in 2015, I found out Izabel *was* an adoptee. Her father was her step-father. As a girl born in a patriarchal culture to a single woman, she was set up to be a victim from Day 1. This was another adoptee suicide.

A 13 year old girl threw herself to her death from a freeway overpass last May. It was deliberate.

A flash of anger still cuts through me whenever I have reason to drive past the spot where this child used a suicide barrier as a launch pad. In early June it was buried in flowers, candles, photos, balloons, and messages written in chalk. After that was quietly cleared away, only IZZY spelled out in red plastic cups stuffed into the chain link fence – like pegs in a Lite-Brite board – stood as a memorial for those driving on the freeway below. By the time school started, not even that remained.

It’s the kind of story that spreads like wildfire: PUBLIC SHAMING LEADS TO GIRL’S DEATH. Hot debate on the practice of “shaming videos” made by parents soon followed, and much speculation on who first posted it online and why. Comments like, “She killed herself over a haircut?” and “I feel sorry for that dad, he will have to live with this the rest of his life,” ran almost even with taunts to the father of, “Was it worth it?” mimicking what he said after hacking off her beautiful hair. Meanwhile, school officials and police helplessly tried to squelch rumors. After much uproar, the intent of a gofundme account set up for the family was revised from, “Help with expenses while Dad takes time off work,” to “Help long-distance family members attend the funeral.”

When eight suicide notes were discovered, it was decided the father had done nothing illegal, and as if to enlist help from the dead girl herself, police issued a statement saying she did not blame him. Of course she didn’t. Girls blame themselves for everything. We blame ourselves if our parents fight. We are responsible for the happiness of others. We are taught to say, “I’m sorry” when someone offends us. We are taught it’s our fault if boys find us attractive, or distracting, or not attractive. If we don’t say “no” it’s “yes,” but if we do say “no” it’s our fault when he takes his revenge on us or the world. And we’d better apologize. Because, really, how hard would it be to just be nice?

And even now people blame her. She should have appreciated that her father “cared that much.” He was trying to keep her safe and pure. She just wanted attention, wanted to get back at him, overreacted. Right. Because nothing says “drama seeking” like carefully yet apologetically planning your own brutal death.

What did this she do, this girl-gone-wild? Shoot heroin? Prostitute herself? What could she have done to warrant her father – her ultimate authority figure and protector – to assaulting and terrorizing her? Apparently she posted a photo of herself wearing a sports bra and leggings to a boy – more clothing than many girls and women wear while shopping, and certainly more than what was worn by other teens later that summer, the summer Izzy would not live to see.

It was technically legal for her father to destroy her the way he did. A minor has no say over her own body, including her hair, when it involves the parents. What would have been classified as assault for anyone else was “tough love” for this man. We were scolded by the newspaper editor’s desk that we should be ashamed of ourselves for blaming him; he had been punished enough by the loss of his daughter, even though he was the reason for her death.

If I had been there, if I had been given a vision, I would have pulled her down from the fence, crying, “No, baby, no. You did nothing wrong. You did not shame your family – your father did.” I am haunted still by the image of this child scaling chain link like an animal, desperate to escape a cage. Desperate to the point of ending her own life.

But even then, if someone had “saved” her, what would have been her life? A girl I went to school with failed in an attempt to kill herself. Instead of compassion by classmates, she was given the nickname Suicide Jan, and encouraged to try harder next time. What would have happened to Izzy? Would she have been shipped off to relatives living on the islands, “adopted out” as her father allegedly threatened? Would she have been taken by the state and placed with strangers in foster care? Perhaps forced on drugs to keep her in a stupor until she reached eighteen and she was someone else’s problem? Would she have really “tried harder next time”? We’ll never know.

We are shaming our children to death. I saw that written in amongst the messages on the overpass, but that one lone protest quickly disappeared, probably taken down by an embarrassed family member.

I started writing this post three months ago, but it never seemed good enough. Now, dozens of revisions later, on the final day of Suicide Awareness Month, I hit publish.

Elle Cuardaigh is author of The Tangled Red Thread and contributor of The Adoptee Survival Guide.

One thought on “Ode to a Girl Called Izzy”